How to what? Yeah, I said butterfly and that means flatten.  It is also called “spatchcock”, a fun term to use.  There are theories on where spatchcock originated, but it appears no one really knows where that word came from.

Ever had a chicken roll off the grill? I have and it’s pretty frustrating. There are plenty of ways and gadgets used in whole chicken grilling recipes and methods. Beer cans for instance can be used to prop them up so they look like they are dancing on the fire. That method is delicious and funny looking, but we’ll talk about that another day…

Sometimes I like to flatten out the chicken and grill him whole.  It is

This is also the first step I take when “cleaning” a whole chicken, or cutting him up into his various components. Flattening a chicken is really pretty easy, so let’s take a look at step-by-step directions.

Step 1 – Cut out the backbone. Here is where we remove most of the structural integrity of the bird. Grab him (or is it her? How do you tell on a chicken? Oh who cares…) by what is left of the tail.  Using a sharp knife or kitchen shears (I recommend the latter), start cutting about a half of an inch away from the backbone and cut all the way from the neck to the tail, like so: 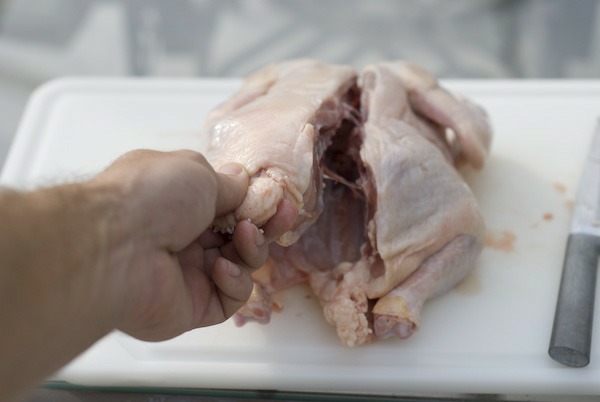 Continue on the other side of the backbone until you can remove it like this: 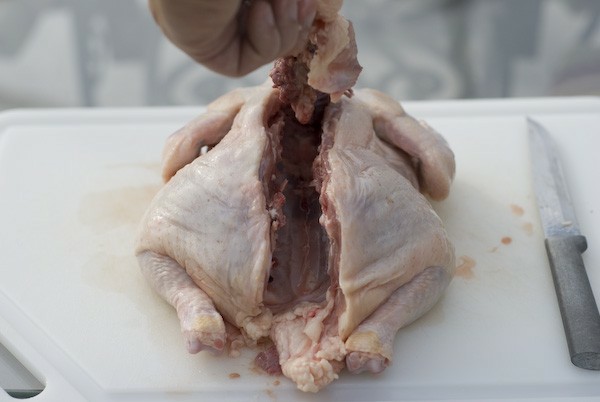 Step 2 – Access the keel bone!  Now that you have the backbone out, use both hands to spread the chicken out so you can see the underside of the breast area.  See this little white piece of grissel under my finger (just to the right of my finger)?  Cut through that with the knife (it is already cut in this picture): 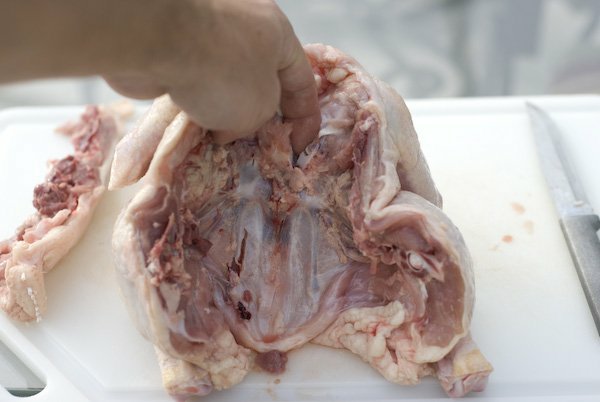 Using the tip of a knife, score the chicken all the way down that line to the tail.  You just want to barely cut through the skin.  Now using both hands, “pop” the chicken open by bending his poor little body in the other direction.  You will now start to see the keel bone through the opening where we cut the grissel, it looks like this: 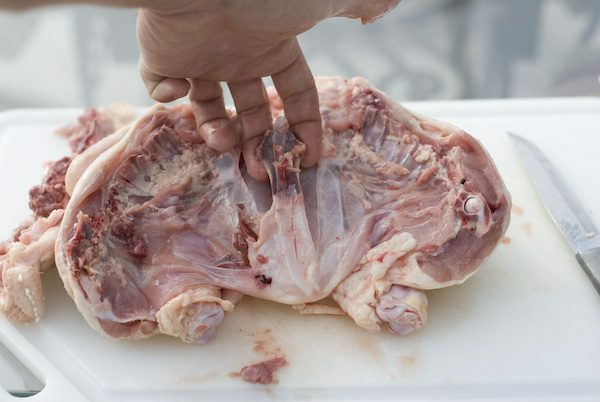 Now run your fingers down both sides of the bone to separate it from the skin and pull it towards you to remove it.  Here is what the keel bone looks like, see why it’s called a keel bone (probably not if you don’t know your way around boats, but trust me…): 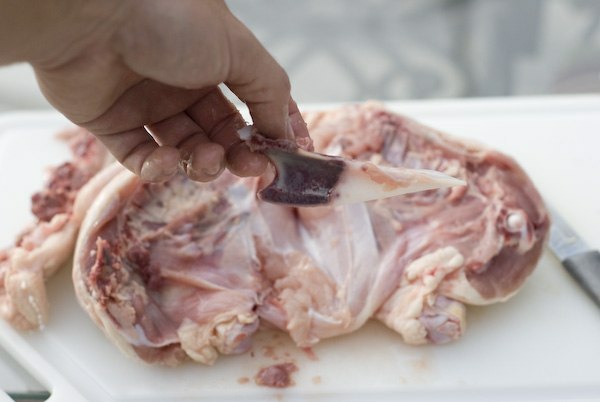 Now you have a flat chicken!  At this point I often cut the chicken it in half, makes it easier to handle.  You can do this very easily now but cutting all the way through where the keel bone used to be.  You can now grill, bake or smoke that delicious whole chicken without having to worry about how to prop it up!

Here is one example of a recipe where I used this, a beer brined chicken.