Oven Brisket on the Grill

I need to confess something right off the bat before we get started.   This is a recipe that could be done just as easily in the oven.  I have tried a few tricks to try and give it a more "grilled" taste, but the wine and tomato sauce just isn't making it easy.  Some oven recipes are bland to me in the house, but come alive on the grill.  For instance, I would never cook a steak under the broiler because God meant steaks to be grilled!  This recipe is different though, it truly does taste just as good in the oven as it does on the grill.

So Why Grill It?
There are several reasons I am grilling this recipe:
This is a grilling website!
It's 65 degrees here in Florida, in the middle of January, seriously!
My wife is pregnant and gets disgusted by the smell of food, so if I don't grill, I have to eat whatever bland stuff she is having...
So bottom line, we don't need an excuse, why sit inside and cook when you can be outdoors?  Let's get to it...

Disposable foil baking pan (slightly bigger than the brisket, but not too big)

2 large red onions, peeled and cut in half

1(optional) - Briskets have a layer of fat, called the fat cap (that's what I call it at least).  When smoking a brisket, most people cook it fat cap up so that the fat kind of melts into the meat and provides more flavor.  For this recipe, I usually trim most of the fat cap off.  Why?  Because all of that fat kind of grosses me out when it mixes with the sauce.  If you like all of that fat, leave it on.

2Rub both sides of the brisket with Kosher salt, rosemary and fresh ground black pepper.  Rub it all over and then set the brisket aside while you cut up all of the veggies.

3Combine the garlic, the rest of the rosemary, about a half of a tablespoon of Kosher salt and about 2 - 3 tablespoons of olive oil in a small cup of a food processor.  I use this thing, the Magic Bullet Express 17-Piece High-Speed Blender Mixing System.  I thought it was a gimmick, but I find I use it a lot for small batches of marinades or rubs!  Pulse the mixture a few times to combine.

4Combine the red wine and crushed tomatoes in the foil pan and transport all of the components out to the grill: 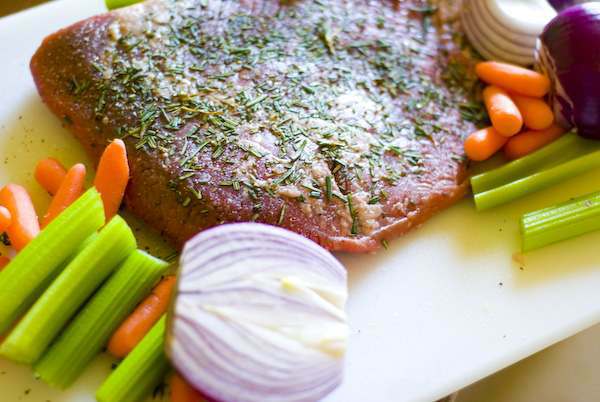 1Fire up the grill!  Preheat the grill to high on one side and medium on another side so we can multi-task.  Once heated, place the brisket on the high side to start creating a seared crust.  Place the pan with the red wine and tomatoes on the medium side to heat up.  Stir the mixture occasionally.

2Grill the brisket for about 3 - 4 minutes and then turn it 90 degrees on the grill.  This obviously doesn't do a thing to the taste (turning the meat), but it creates those great grill marks!  The point here is to sear the outside of the meat. 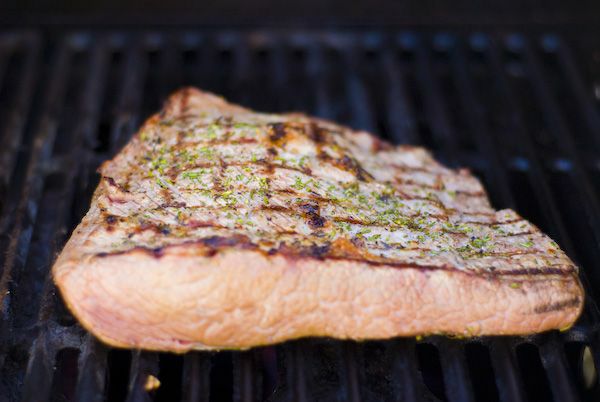 1After about another 4 minutes, flip the brisket over and continue the grill/turn/grill process on the other side for a total of about 8 minutes per side.

2Now that we have a good sear on the meat, turn the heat down on both sides of the grill to about medium-low.  If you have a 3 - 4 burner system, turn off the middle burner(s) and leave the outside burners on medium-low.  Place the pan in the cooler portion of the grill and add the brisket to the sauce.  Spread the veggies around and then sprinkle the garlic and rosemary mixture over the meat and veggies.

1Cover the pan tightly with aluminum foil and close the lid.  The idea here is to let the mixture simmer, so adjust the heat accordingly for the first half hour or so.  This is the part that can be done in the oven.  If this were in a convection oven, we would set it at about 325 degrees and let it go.  To create the same process on the grill, I only need about 250 degrees, since the heat coming from the bottom on the pan will help it keep simmering.

3When the meat is done, it should pull apart very easily with tongs.  Place the brisket on the platter and slice to serve.  The sauce and the veggies are awesome as well, so I like to cook some rice to go along with this dish.

So there you have it, oven cooking on the grill!  Again I ask, why sit inside and cook when you can be outside enjoying the beautiful weather?  What other oven recipes have you cooked on the grill?  Do you have any other traditional oven dishes you would like to see turned into grilling recipes?  Give us a challenge, we love that!  In the meantime, we just added another one that tastes even better on the grill than in the oven.  Check out our recipe for grilled beef roast next time you want some sandwiches for the week!