In my last post, I was rubbing it in about how warm it was in Florida in the Summer and why that was a good excuse to cook oven recipes like beef brisket on the grill.  Well, it is still in the mid-70s here in Florida in February and I had a craving for roast beef sandwiches, so I decided to grill a beef roast.  This is another recipe that is popular for the oven, but unlike the beef brisket recipe that tastes just as good in the oven as on the grill, roast beef takes on a whole new flavor on the grill that just can't be duplicated in the oven.  The smoky rosemary flavor of this recipe will accompany that roast beef sandwich you will be taking to work for the next 4 days and almost make you forget that you are about to spend the next 4 hours of your life in a meeting to plan tomorrow's meetings.  Just 4 more hours until the biggest worry is going to be which reality show you are going to watch while this delicious hunk of meat cooks...you can make it.

4 - 5 pound bottom round beef roast (there are many types other than bottom round.  Ask your butcher which one they recommend)

1Rub your roast with the salt, pepper and rosemary and let sit at room temperature for up to an hour, preferably more than 30 minutes.

2Preheat the grill on high and place the smoke pouch over the hot part of the grill, we are going to sear that amazing beef roast before we go any further and get those wood chips smoldering.

3Once the grill is heated and the roast beef has warmed up a little on the counter, place the roast on the hottest part of the grill.  Sear each side of the roast for about 5 - 8 minutes per side.  Your time may vary, but what we are looking for is a nice sear, to start the crust. It should look like this on each side: 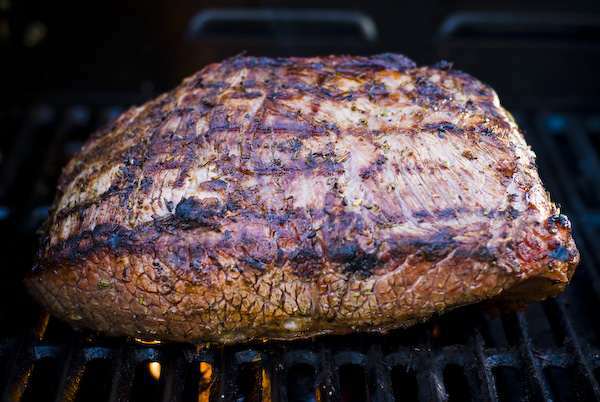 1Once you have seared EACH side, turn off one burner and turn the remaining burners to medium for indirect cooking.  For a 3 burner system, turn off the middle burner and leave the outside burners on medium.  For a 4 burner system, turn off the middle 2 burners and leave the outside 2 on, you get the point.  Place the roast beef over the 'off' burners.Important Note:  Check out this grilling tip if you use your grill's lid thermometer as an indication of your cooking temperature.  Here's a hint, it's lying to you...

2You should now have a smoking smoke pouch and a roast sitting on the 'cool' part of your grill.  Place the thermometer in such a way that you can "peak" in on the temperature.  Now regulate the burners so that the thermometer reads right around 300 degrees.  Leave the lid closed as much as possible and let it cook for about an hour and a half.

into the thickest part of the beef roast.  I recommend shooting for between 145 and 150 for a medium to medium rare roast beef.  For a 4 pound roast, this will generally take between 2 and 3 hours.  At this point, you can go ahead and leave the meat thermometer in the roast.  Again, position it so you can peak in on it from the holes on the side of the grill so you don't have to open the lid and lose all of the heat.

4Once the instant read thermometer

reaches between 145 and 150, remove the roast from the grill and place on a carving surface.  Allow the roast to cool for about 15 minutes to let the juices redistribute, then carve against the grain with an electric knife.

There you have it, a nice smokey and rosemary flavored beef roast on the grill!  The crust formed on the outside of the roast is the best part.  I know it isn't politically correct to say, but the fat on the outside of the roast has the best flavor, so be careful not to trim that off (come on, you aren't that fat!).  If you are looking for a leaner cut, check out the tri-tip roast.

Again I say, why cook inside when you can cook a beef roast outside on the grill?  Even if the weather is not as nice as it is here in Florida in February, the fresh air will be good for you.  So get outside, use your grill as an oven and roast that beef!  What other traditional oven dishes would you like to see turned into grilling recipes?