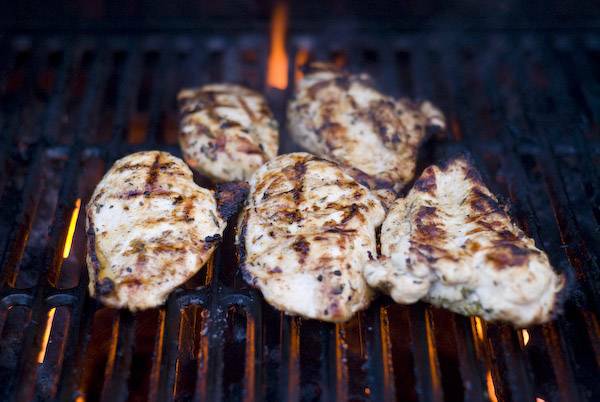 Whenever I see fajitas on a menu, I can't help but think back to the very first time my Dad ordered them in a restaurant.  It was at Chili's, back when they first opened and my Dad said "I want to try some of them fuh-gee-tahs".  Still cracks me up to this day, especially since he still pronounces them wrong...

Here's a great recipe from contributor Bill Mitchell from Atlanta.

2Seal and toss the bag around to coat.

3Marinate in the refrigerator for at least 2 hours.

1Toss onions and peppers in a bowl with a drizzle of olive oil, salt and pepper.  Add a few drops of chili oil if you are brave.

2Setup the grill for both direct and indirect grilling, by placing coals to one side of the grill.

3Place chicken directly over coals for about 3-4 minutes each side until seared.

4Move to other side of the grill, toss in a handful of wood chips and close the lid.  Replenish the wood chips after about ten minutes.

5After 20-30 minutes the chicken should be done.

6Let rest for 10 minutes and then slice the chicken into strips.

1While the chicken is resting,  toss another handful of wood chips on the coals and grill the onions and peppers in a grill basket or wok directly over the coals until slightly tender.

1Serve on Cast Iron Servers. Why, because they are cool!  Preheat your cast iron servers in a preheated 400 degree F oven for at least 20 minutes, to get a good sizzle when you plate the fajitas.

2Wrap the tortillas in foil and warm them in the oven with the cast iron servers for 15 minutes.

3When you are ready to serve, remove the cast iron servers from the oven and quickly arrange the meat and peppers and onions on the servers. The meat and veggies will immediately start to sizzle from their fat and moisture. Serve sizzling immediately with the warm tortillas and other accompaniments and enjoy!