Stubb’s Bar-B-Q sauce company sent me a prototype bottle of their new gluten free moppin’ sauce.  I felt like I had stolen this unmarked bottle straight from their labs.  The only thing distinguishing it as a Stubbs product was the cap.  No labels, no marketing, just anticipation for trying a free bottle of not-yet-released deliciousness. What makes it gluten free?  Stubb’s replaced the corn syrup with a more healthy sweetener in their new mopping sauce.  This new sauce has the same tangy goodness of the original moppin’ sauce, so I think they have another winner and folks with Celiacs can enjoy it without worrying about the after-effects.

I just happened to pick up a pork tenderloin on sale that day so I had the perfect vessel to carry that awesome sauce into my belly.  Pork tenderloin is a great meat for grilling.  It’s very lean and cooks pretty quickly for a thicker cut of meat.  Because it is so lean, it requires a little care and attention to ensure it doesn’t get too dried out on the grill.  Searing the pork tenderloin and basting it with a nice sauce are great techniques to produce a nice and juicy tenderloin. 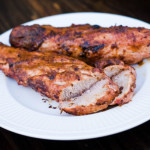 Stubbs Mopping Sauce mopped all over a pork tenderloin on the grill. The mopping sauce keeps it moist and add a ton of flavor.
Prep Time10 mins
Cook Time20 mins
Total Time30 mins