What’s not to love about a cut of meat with the word “tender” in it’s name? Grilled beef tenderloin is right up there with my choices if I ever need to pick a last meal. If you have a special occasion coming up and want to impress your guest, this is the cut of meat you should splurge for at the butcher’s shop. Some cuts of meat require work to get great taste and optimal tenderness. With the beef tenderloin, all the cook needs to do is not screw it up.

The beef tenderloin is the cut of meat that provides us with the filet mignon. Just like the filet mignon, we want to keep the seasoning minimal and focus more on technique. Aside from over-seasoning, the easiest way to screw up a great beef tenderloin is to over-cook it! If there was ever a justification to purchase a good probe meat thermometer, this is it. You just paid a lot of money for this thing, what’s another $40 for a good probe thermometer that will allow you to monitor the progress?

Before we get into actually cooking this hunk of meat, we need to talk about trimming and preparing the tenderloin. If you can, I would suggest getting your butcher to trim the meat for you. You may pay more for it, but it will save you about 20 minutes of trimming time and also save you the trauma of removing so much waste from this expensive cut of meat. On the 6.5 lb. tenderloin I just prepared, I would estimate that I removed a pound of fat. That’s a lot of waste and it hurts to throw that stuff away after spending so much on the tenderloin. Entire articles have been written and some videos published on how to trim and prepare a tenderloin, so you can Google if you need more information. You are going to want to remove all of the fat and membrane (most will come off by pulling with your hands), the rubbery silver skin and the “chain”, which is a fatty piece of meat that runs down one side of the tenderloin. Once trimmed, fold a few inches of the thin end of the tenderloin over onto itself and secure with butcher’s twine.

Tie some twine around the tenderloin at about 2 inch intervals to hold the shape. Once the meat is trimmed and tied, you’re ready to get started cooking!

Update for 2017 – I used to prescribe to the “don’t add salt too early or it will pull moisture out of the meat”. After grilling many beef tenderloins and other cuts of meat, I think that is false. I prefer to add Kosher salt and fresh pepper to my beef tenderloin. If you don’t, people are going to be asking to pass the salt and that is just a sign you (as the chef) didn’t season your meat properly! 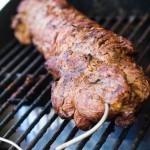 How to Grill Beef Tenderloin

One of the best cuts of meat, you want to make sure you cook this correctly. Follow our beef tenderloin recipe to get it right every time.

Previous Post: « Grilled Chicken Breasts with Clove Spice Rub
Next Post: How to Cook Bacon on the Grill »