It isn’t easy to get good crispy bacon.  Many people that don’t know any better cook the bacon at a high temperature and get burned but chewy bacon.  In this post I’ll give you a quick run down on what I’ve found works.  And yes, since this is a grilling site, we’ll do it on the grill. 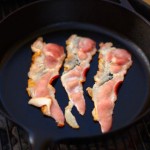 How to Cook Bacon on the Grill

Update: Recently read on Twitter that if you soak the bacon for a few minutes in cold water before frying, it will be even crispier.  Next time I fry bacon, I’ll give it a try and let you know how it turns out.