I’m usually a “no shells” guy when it comes to grilled shrimp. I’d prefer to just eat them right off of the stick, all Caveman style and what-not. This shrimp teriyaki marinade contains a lot of sugar though, which tends to caramelize quickly over high heat, so those shells really save the day by providing a barrier to the heat. The shells also hold some of that delicious marinade and bits of ginger in place longer, ramping up the teriyaki taste points. Make sure you still devein your shrimp by cutting through the back of the shell and removing the dark vein. Better yet, most supermarkets sell them already deveined but in the shell. The teriyaki marinade shown below is a simple recipe just for marinating the shrimp. If you really want to ramp up the recipe, throw together this teriyaki sauce recipe to serve with the shrimp for dipping and to drizzle over a side of rice. 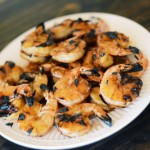 Shrimp Teriyaki on the Grill