Shrimp kabobs on the barbie (said in an Aussie accent) make a great appetizer.  But we’ve heard people argue about the best way to grill the shrimp:  shell on or shelled.  We set out to settle this age old argument once and for all.

The theory for shell on is that with the shell on, moisture is retained and they are said to impart some flavor into the meat. After all, you can use shrimp shells, even cooked shells, to make a really good stock for other recipes such as gumbo or etouffee. So if you take off the shell, you lose that flavor. Another position is that is is much harder to take the shell off of a raw shrimp, and it is usually left to the cook. So if you, being the cook, decide to leave the shell on, I wouldn’t fault you, regardless of the results of our little experiment here.

The argument for shell off is basically that it lets you get spices and flavoring directly onto the shrimp. So all that tedious basting you have to do while you sip your beverage of choice will actually make a difference in flavor if it is going straight on the meat instead of just running off of the shell and dripping down into the grill.

Both sides make good arguments. Let’s find out who is right. 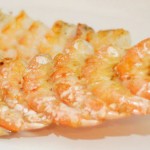 Shrimp kabobs on the barbie(said in an Aussie accent) make a great appeitizer.  But we've heard people argue about the best way to grill the shrimp:  shell on or shelled.  We set out to settle this age old argument once and for all.
Prep Time30 mins
Cook Time5 mins
Marinade1 hr
Total Time1 hr 35 mins
Course: Appetizer, Main Course, Side Dish
Servings: 4
Calories: 166kcal

The results?  Well, the shrimp with the shell on were much more tender while the shelled shrimp were a bit tougher. But the shelled shrimp had a much better flavor.  Experimenting further, we found that a deeper cut when de-veining, almost a butterfly cut, but a little less than 1/2 way through the shrimp, resulted in more surface for the marinade to get in.  A longer marinade time, about 2 hours, helped too.  But the flavor was still less than the shelled shrimp.  However, in the end, we all agreed that the tender shrimp that were cooked with their shells on were our preference.  A little dip in the garlic butter, or some cocktail sauce made up for the lack of flavor.