Barbecue pork chops are a basic grilling recipe that everyone standing over the coals should know how to master.  And while I too am a fan of the thick cut pork chops, sometimes it is hard to pass up the deals on the thinner cut chops when you’ve got a house full of guests to feed.  No reason those can’t be tasty and moist as well.

I know some people argue that you shouldn’t add BBQ sauce until the meat is removed from the grill due to the caramelization of the sugars in the sauce.  But I actually prefer a bit of this as I feel it adds to the flavor of the sauce.  Not burned, but a little bit browned.  Hot enough that the BBQ sauce bubbles, thickens and darkens and the flavors seem to intensify. 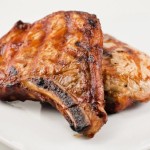 Barbecue pork chops, a grilling staple for all outdoor chefs, is delicious recipe when cooked properly.

Previous Post: « Chicken Rolled with Prosciutto and Fontina Cheese
Next Post: How to Light a Charcoal Grill »