Christmas dinner was at my house this year and my wife wanted to serve a roast beef for our 12 hungry family members, so off to the grocery store on Christmas Eve I went.   Yes, I always procrastinate and I paid for it when I was greeted with about 1000 people that weren’t totally in the Christmas spirit.  We’re talking full contact, elbows flying, combat shopping at the meat cooler.  I found an opening by the roast and steaks section and proceeded to wedge myself in to the melee.  As the crowd parted, a lovely sirloin tip roast a little bigger than a football lay calling my name.  I scooped that bad-boy up like I was recovering a fumble and turned around with my head and shoulders low to protect the roast all headed back to my waiting cart.  One more stop on the charcoal and beer aisle and I was out the door and back into my car to hopefully not see the grocery store again until 2010.

It was a warm 75 degrees in Florida on Christmas Day (sorry to rub it in), so I convinced my wife that cooking this baby outside would free up the oven to be used for sides and desert.  You can also use this technique with a regular grill, cooking over indirect heat.  Just pile the coals up on one side or light only a few of the burners.  Cook the roast over the cooler side of the grill.  For me though, ever since I built my own not-so-ugly drum smoker I look for every excuse to use it.  To properly cook a roast beef, we need around 325 to 350 degrees for about 20 – 30 minutes per pound.  Most of the other smokers I have owned required a lot of effort to keep that (relatively, for a smoker) high temperature going for an extended period of time.  Not with this smoker design, the roast beef came out perfect and took a little over 3 hours.  I never had to add additional coals and only shook the fire box once to allow some of the ash to settle to the bottom.  Enough about my love affair with the smoker, let’s get into the details… 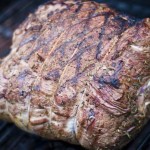 To properly cook a roast beef, we need around 325 to 350 degrees for about 20 - 30 minutes per pound.  Most of the other smokers I have owned required a lot of effort to keep that (relatively, for a smoker) high temperature going for an extended period of time.  Not with this smoker design, the roast beef came out perfect and took a little over 3 hours.

Just A Simple Rub Down

You Don't Need A Lot Of Smoke

If not handled and cooked properly, this cut of beef can be a bit on the tough side.  Even though it has “sirloin” in the name, this cut comes from the Round, which is the front part of the back leg.  This means it is used to walk and run and muscles used for moving tend to be leaner and less tender.  Some people recommend marinade, but it has been shown that marinades mainly affect the surface of a roast.  Your best best here is to cook at low temps.  Even lower than this recipe recommends, treating it as if you were smoking a pork butt, will result in a more tender version of this roast.

What temp should sirloin tip roast be cooked to?

As mentioned above, you don’t want to over cook the sirloin tip roast, if you do so it will become dry and tough, and even the left overs on a sandwich be hard to distinguish between beef and shoe leather. Medium rare at 130 degrees Fahrenheit is the best temp for this roast. Make sure to let it rest a bit before you carve it.

Where does sirloin tip roast come from?

The sirloin tip roast comes from the front part of the Round cut, which is the hind leg of the cow. Since this part cow is responsible for movement, meat from this round cut section tend to be leaner and less tender than some of the more expensive cuts of meat. So despite the name of this roast, it does not come from the sirloin section of the cow.