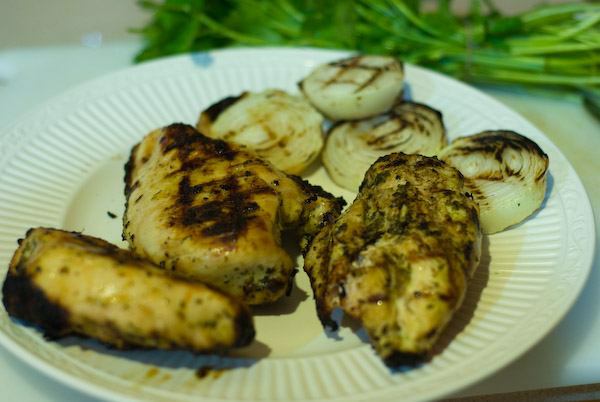 Boneless, skinless chicken breasts were on sale last week, so I bought 6 packages.  I am a cheap man with a lot of freezer space, so it just made sense to me.  So needless to say, my kids seem to be growing feathers this week from all of the chicken intake.  I knew I needed to switch it up quick or my family was going to walk out on me, so I decided to make one of our favorite family meals, only this time on the grill.

Chicken enchiladas are perfect for families.  Well, any meal I can cook one night and eat for the next 2 is perfect, and enchiladas definitely fit into that category.  Though I usually cook these in the oven, marinating and then grilling the chicken with the vegetables really adds great flavor to this dish. There are many recipes out there for enchiladas, especially the filling and sauce, but here is my simple recipe.

28 ounce can of tomato sauce

1Let's start out by marinating the chicken. This marinade is really potent, so you don't need a lot of time to add great flavor. An hour will do it, 2 hours are even better. Throw all of the marinade ingredients into the food processor, pulse and then pour it over the chicken breasts in a bowl.

2Let the chicken marinate for at least an hour, up to 3 hours, flipping the breasts once. The last 30 minutes should be on the counter at room temperature.

3While the chicken is marinating, chop up your cilantro and slice the onion into thick slices. Try to keep all of the rings together so you don't have to chase onions around the grill.

4Heat the tomato sauce in a pot until it just starts to boil and then turn the heat down to low to slightly simmer.

5Add all of the spices to the sauce and stir well.

6Adjust the spices to taste. Enchilada sauce has a hint of cinnamon and I like mine with a little heat. Adjust to your liking…

7Now that the chicken has been marinating for an hour, let's move the party outside and fire up the grill!

8Heat one side of the grill to medium heat, while leaving one burner on the other side completely off. The cool side will become our heating station for the tortillas. Heating them on the grill will allow us to pick up a little additional smoke taste from the chicken. 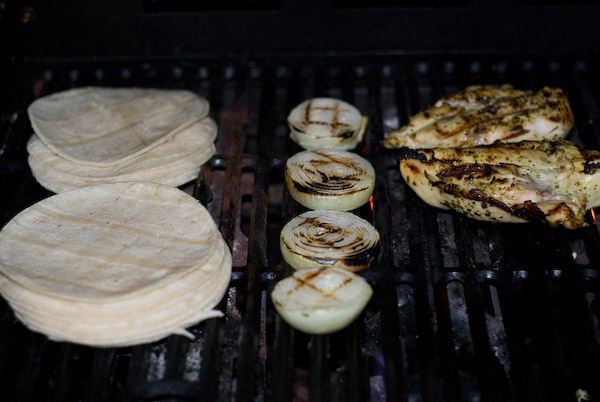 1Grill the chicken over the hot (medium) side of the grill with the lid closed while cooking.

2At the same time, grill the onions to soften them slightly and create some good grill marks.

3Once the chicken has cooked through, the onions are slightly softened and the tortillas are warm, let's move it back to the kitchen.

4Slice or pull the chicken into thin pieces and place into a bowl.

5Dice the grilled onions and add them to the bowl with the chicken.

6Add your cilantro and cumin to the bowl and we've got an enchilada fiesta! 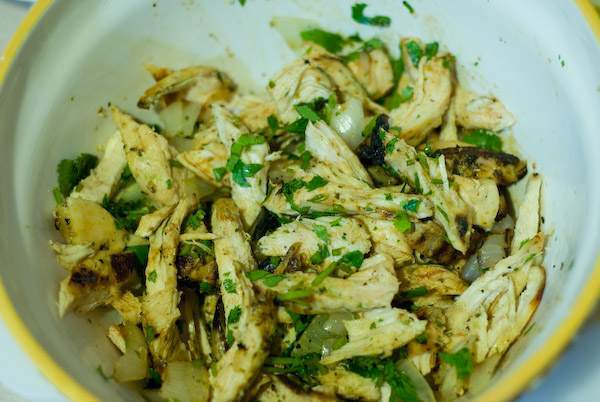 1Taste the filling in the bowl. Want a little heat? Add some cayenne. Not salty enough? You know what to do…

2Ladle enough sauce into a casserole dish to cover the bottom of the dish, just enough so that the tortillas don't stick.

3Scoop some of the chicken filling into each tortilla, roll the tortilla and place it with the fold down into the dish, on top of the sauce.

4Once you've used all of the chicken filling (or ran out of room), pour the rest of the sauce over the top of the enchiladas.

5Layer on some shredded Monterrey Jack cheese and place under a broiler until the cheese has browned slightly.

6Serve with some rice and enjoy! 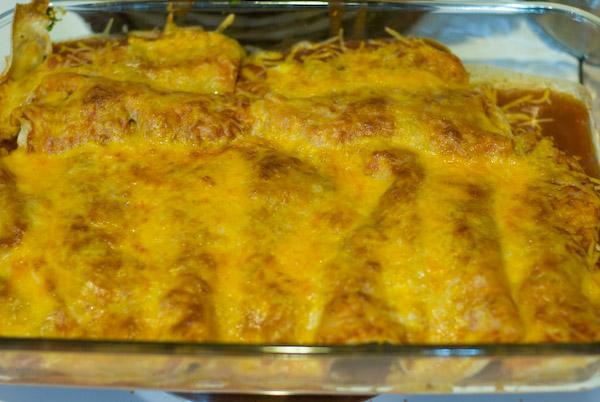 Sure, you can make this entire dish in the kitchen by cooking the chicken in a skillet. Once you try it though, I think you'll agree that the marinade and the grilling adds some pretty awesome flavor to this Mexican fiesta.

These are fantastic. Taste WAY better than they look. And the kids love em!