Coconut Custard came about because I wanted to cook something unique on the grill.  Inspired by thinking about fancy looking things that I imagined Martha Stewart might do (WWMD?).  A clever presentation.  I wanted to grill in the edible serving dish.  A coconut came to mind.

Sometimes here at Grilling Companion we go out on a limb and experiment, hopefully to your benefit. Sometimes it works, sometimes not.  This recipe is a second attempt.  My first attempt was a Coconut Brownie that just didn’t work out like I hoped.  I wound up with brownie on top, and uncooked brownie underneath (still tasty, BTW).  The Coconut Custard turned out better.  Normally you cook custard in a water bath.  The brownie failing suggested to me that the coconut provided too much insulation for normal baking.  But it worked in place of the water bath, added extra flavor to the custard, and smelled wonderful while grilling.  The smell of roasting coconut is fantastic. 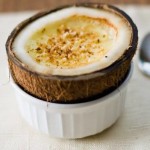 Coconut Custard on the Grill