Beer can chicken is one of the most quintessential grilling recipes and technique. I’m not sure whether it’s how funny the chicken looks sitting upright on the grill or the fact that it really is a great way to grill a whole chicken, but it’s certainly a popular grill recipe. The concept behind this recipe is that while the chicken slowly cooks on the outside over indirect heat, the steam from the beer helps cook the chicken from the inside to keep it juicy. I’ll be honest, I’m not sure the beer actually does anything but serve as a pedestal for the bird. The beer left in the can hardly ever simmers when I am grilling a beer can chicken. This is due to the fact that the heat is not directly under the can, so it never really seems to get quite hot enough to simmer and steam. Nonetheless, it sure makes a great stool for the chicken and it looks pretty darn funny while it is grilling!

I prefer to rub the chicken first, but a rub is completely optional in this recipe. If you don’t have the rub ingredients laying around, some Kosher salt and fresh ground black pepper will do the trick. If you do happen to follow the directions for the rub, be warned that it may char in places on the chicken, depending on how far away you can get the chicken from the heat sources. The charring is due to the sugar in the rub, but it’s really not a big deal as it will only char the skin and will peel right off of the meat (besides, it actually tastes pretty good!). The smoke pouch in this recipe is also optional, but in my opinion you should really use one when cooking something for a longer period of time, especially on a gas grill. The rub is optional. Some Kosher salt and fresh ground pepper is fine. 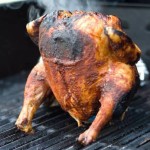 Beer can chicken, a popular and delicious grill recipe.