The folks from ManGrates contacted us via Twitter and asked if we were interested in trying out their product and of course, we love to try new stuff.  A few days later this really heavy box arrived that would work nicely, if nothing else, as an anchor for our boat.  Inside were two REALLY solid cast iron grates.  I said “surprised” early because I really never put much thought into new grates for my grill.  I didn’t think I had a problem with the ones that came with it, so I was a little skeptical but ribeyes were on sale at Publix so what the heck?

After following the seasoning directions for the grates (which is simple, just coat with cooking spray and heat over the grill), I was ready to start my experiment.  I bought 3 steaks so that I could cook one on the Mangrate, one over the regular grate and the other would be cooked using the winner from a blind taste test for the family.  One of the big advantages listed for the Mangrate is the fact that it cuts down on flare-ups.  To ensure the best chance for flare-ups, I decided to use the charcoal grill where the fat from a ribeye likes to combine with the coals to create an inferno.

So how did they work?  I usually have to move the steaks around quite a bit to keep from charring too much over the flare-ups.  In the case of the Mangrate, I never moved the steak and let the flare-ups rage below.  The awesome thing is that the flames never actually made it to the steak.  I’m not sure if it is the added height, or the shape of their grates, but something prevented the flames from over-charring the steak.  The cast iron also creates some really beautiful grill marks as you can see here: 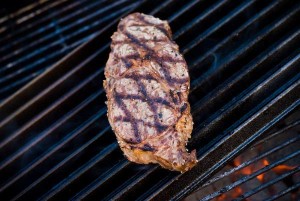 For the other steak, I cooked it as usual on my Weber grate.  I did have to keep on top of the flare-ups and move the steak around a bit to avoid the flames.  The result is still a great seared crust, but not nearly as eye-catching as the grill marks from the cast iron Mangrates: 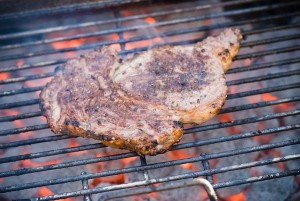 So the Mangrates did create a great looking steak without too much fuss, but how did they taste?  My wife would be the judge for this one and therefore, she was banned from the patio during the cooking phase so she couldn’t see which was which.  In the end, she really thought the Mangrate ribeye tasted better than the regular Weber charcoal grate steak.  As for me, I think they both tasted great, but I couldn’t tell a huge difference.

Though I didn’t taste a huge difference in the steak, appearance is an important part in the eating experience.  There’s a reason steaks at those expensive steak houses have great grill marks, they make for a great presentation and improve the overall experience of the steak.

Also, the Mangrates are great at cutting out the flare-ups.  The added height of the grates (and from their literature, the shape) allows the flare-ups to rage below and never hit the actual meat. 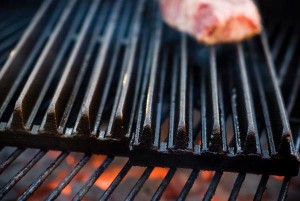 I’ve used the Mangrates a few times now and have never had to move the meat once to avoid over-charring.  For that reason and the great grill marks, I’ll continue to use the Mangrates on my grill at home.