Ah, summer. Street fairs and carnivals with cotton candy, funnel cakes and grilled corn on the cob. Want to capture that street fair flavor at home and impress your cookout guests? Fortunately grilling corn is easy, and keeps your kitchen clean! When cooking ears of corn on the grill you have several options, but if you want to reproduce that street fair flavor, you have to cook it in the husk. This isn’t hard, but there are a few tricks that will result in the most succulent kernels. 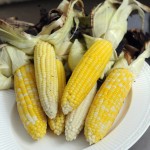 Grilled Corn on the Cob

Corn grilled in the husks. It is easy and has a slightly better taste than boiled corn. And you get to leave the shucking to the eaters.
Prep Time2 hrs
Cook Time20 mins
Total Time2 hrs 20 mins
Course: Side Dish
Servings: 4
Calories: 161kcal
Author: Steve

Summary:
1. Pick good corn.
2. Soak in water for 1 hour or more.
3. Cook over low direct heat for about 5 minutes or until husks are brown and charred all over.
4. Rotate 1/4 turn, repeat cooking until all sides are brown.
5. Cool a bit, then peel back husks and remove silk.
6. Butter, season to taste, and enjoy!

This is the most delicious way to grill corn on the cob, in the husk after soaking in water.  Grilled corn on the cob goes great with grilled pork chops and especially well with other finger grilling foods like grilled chicken wings!