Up until recently, I hadn’t ever given much thought to flat iron steaks.  Actually, until 2002, the only though any butcher had given to this cut of meat was how quickly they could get it into the grinder. The flat iron steak (also known as top blade steak) was “developed” in 2002 by two researchers at the Universities of Nebraska and Florida (what a job, huh?). When I say “developed”, I mean that these guys realized that this meat that was usually turned into hamburger could actually be cut in a way that made it a delicious steak. Fast-forward to 2010 and this steak is now the fifth most popular cut of steak, and one of the most economical. Some even think it has a better taste than more expensive cuts like the New York Strip. Count me as one of those flat iron steak fans.

So it was “developed” in 2002, but I didn’t really develop and interest until they went on sale at my grocery store 2 weeks ago. Now in the last 10 days, I have grilled 4 of them. Yep, the quickest way to my grill (and stomach) is via my grocery store’s weekly ad.  Now that I have a few flat irons under my belt (both figuratively and literally), I feel like I have been missing a great cut of meat.  Like many other cuts of steak, your job is to not screw it up, cook it just right and let the natural beefy goodness come through.  The flat iron steak should not be cooked past medium temperature or it will get a little tough.  It’s best at medium-rare.  I admit, I let a few of the steaks sit in a little Worcestershire sauce, and it was delicious but not too overpowering.  Most of the time, fresh ground pepper is all you need.  Let’s get right to it. 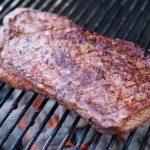